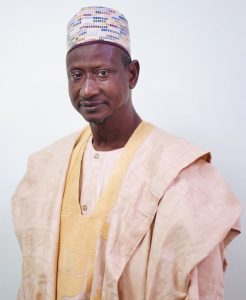 Adamu D. Umar Gokaru was born on the 17th June, 1963 in Gokaru, Alkaleri Local Government Area, Bauchi State. He graduated with Bachelors of Science Degree in Accounting from Bayero University Kano in 1988 and from the Nigerian College of Accountancy Jos in 1998. He earned a Masters in Business Administration in 2001 from the Abubakar Tafawa Balewa University Bauchi.
Gokaru has attended a number of certificate courses some of which include: Comparative Tax Policies and Administration, August 2014 at the Harvard Kennedy Business School, USA, International Public Sector Accounting Standard [IPSAS] in Ghana July 2009, Leadership Development Programme in Yankari, Bauchi State, January 2012 amongst others. Gokaru is a Fellow of the Association of National Accountants of Nigeria [ANAN], Chartered Institute of Taxation of Nigeria [CITN], member Financial Reporting Council of Nigeria 2013, and Associate Member Society for Forensic Accounting and Fraud Prevention 2020.

He commenced his working career as Accountant II with the Bauchi State Civil Service in August 1989, from there he was seconded to National Agricultural Land Development Authority [NALDA] as Principal Accountant from July 1992 to February 2000. From March 2000, he was posted to Petroleum Special Trust Fund [PTF] and later seconded to Alkaleri and Itas Gadau Local Government as Treasurer between April 2000 and September 2007. Adamu Gokaru went back to State Civil Service as Chief Accountant and later rose through the ranks to become the Deputy Accountant General, Operations and subsequently the Accountant General/Permanent Secretary, Treasury on 20th July 2011. A role he held until 30th September, 2015.

On 1st October, 2019 he commenced his journey as Permanent Secretary to various Ministries and Departments within the Bauchi State Civil Service. Some of the MDAs he served in this capacity include Ministry of Cooperative and Poverty Alleviation, Ministry of Commerce and Industries, Political and Economic Affairs, Special Service, Establishment and Servicom Matters Bureau, and finally appointed Head of the Bauchi State Civil Service on the 23rd February 2019. He held this position until the 16th of July,2019. Adamu Gokaru was subsequently appointed General Manager and Chief Finance Officer, Galaxy Backbone on the 1st of December 2020 and later appointed by the Board of Directors as the Executive Director Finance, Galaxy Backbone Limited on 1st March 2021.

He is happily married with children.

Back to Management page